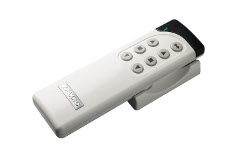 The ZWP15 multi-channel remote control enables radio control of FAKRO electrical accessories and of other manufacturers which are compatible with the Z-Wave communication system. The ZWP15 remote control can be used to operate up to 15 devices individually on five channels (three devices per one channel). It also allows the creation of 15 independent groups. Each group can contain several devices operated simultaneously. The controller's memory can contain up to 231 devices. The ZWP15 remote control can serve as the basic controller - PRIMARY and additional controller - SECONDARY. The PRIMARY controller allows the integration of numerous devices into one radio network, while the SECONDARY controller acts as additional controller in already existing network. The ZWP15 remote control features two working modes: Basic control mode - command activates after short (app. 0.5 sec.) click of the movement button and starts the accessory until its motor reaches end position i.e. complete closing / opening of the device. ; Multilevel mode - command activates after longer than 0.5 sec. Pressing the button until the accessory reaches required position. Also, for convenience the device can be magnetically wall mounted.

The ZWP15 remote control enables radio control of FAKRO accessories and of other manufacturers which are compatible with the Z-Wave communication system. The ZWP15 remote control is equipped with a two-way Z-Wave communication radio module which exploits radio wave frequency 868,42 MHz EU (frequency depending on the country for which the product is intended).